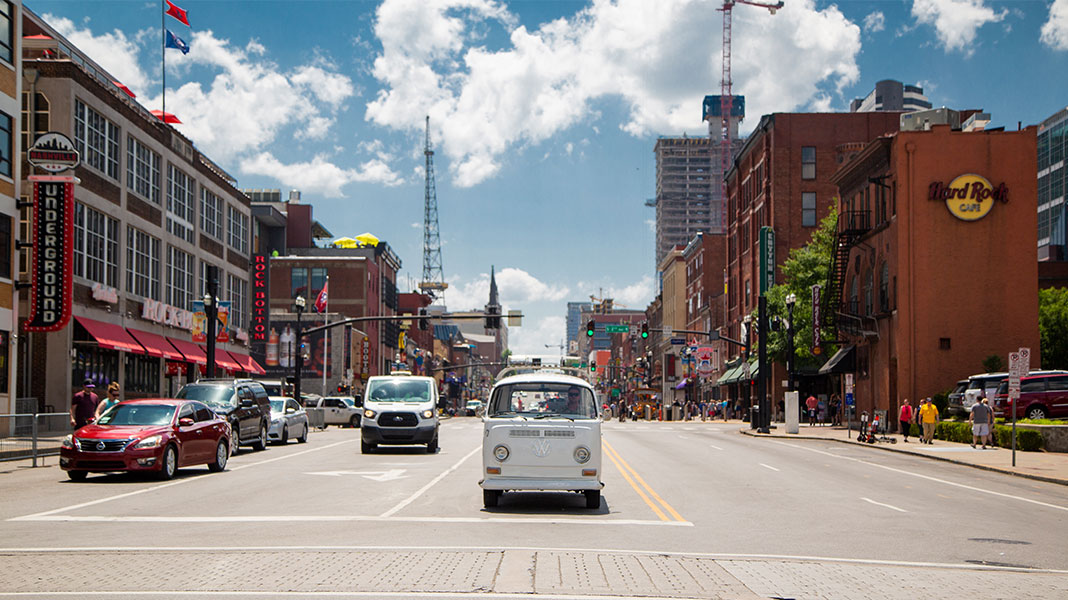 Dean Diehl (’87) says there are basically three types of entrepreneurs. The first is the hopeful baker, the coffee lover or the tailor who has always dreamed of translating their passion into a business plan.

The second is the entrepreneur born of necessity—the side hustler.

According to Diehl, who serves as director of Trevecca’s entrepreneurship and small business management program, there is no one type that is more common than the others. And in a city like Nashville that seems to be constantly attracting new businesses, there are sure to be all types who are looking to fund all sorts of dreams.

City on the Rise

Nashville’s growth is a topic on nearly everyone’s mind recently. According to a Vanderbilt poll from April, some are in favor of the expansion, while others are skeptical of the city’s direction.

Public opinion aside, Nashville is growing in numbers, and with an increase in residents comes an increase in businesses. Since 1990, more than 930 large companies have relocated to Middle Tennessee, including corporations like Nissan, Under Armour and Amazon. These relocations have created significant growth for the city—laying the foundation for local entrepreneurs to build their own businesses.

Nashville is the nation’s fourth best city in which to start a business, according to the small business and start-up- focused Inc. Magazine. Magnify Money found that among the 50 largest U.S. cities, Nashville is in the top five for women who want to launch and own a business.

The business landscape in Nashville is abundant, and entrepreneurs from across the country are moving to the city to take advantage of the market— like Alaina Schwartz (’09) and Percy Blade (’16).

Originally from Louisville, Ky., Percy Blade came to Nashville to study business at Trevecca. He said that of the three types, he would classify himself a pure entrepreneur. He remembers selling candy to classmates in middle school and said that kind of business sense is something he learned from his parents.

“I saw my parents both create their own businesses, and because of them, I’ve always had an entrepreneur in me,” he says. “Anybody can do anything, especially if you have enough money, but what separates it is the passion. That is what makes business really work. God gave us our passions for a reason. We can change the world with it.”

Blade graduated with his undergraduate degree in business in 2016 and went on to complete his master’s in organizational leadership at Trevecca the next year. After working a 9–5 job that he said wasn’t for him, he was ready for a change. That’s when Blade says God stepped in.

As a business major, it felt natural for him to move into a role as a small business owner, and leaning on his passions for health and service, he decided to create Percy Blade Co., an online fitness coaching company.

“If you—for one second—dread waking up on a Monday morning and cannot wait until Friday, a 9-5 is probably not right for you. That’s where I was, and ... I couldn’t give up on myself,” Blade says. “I know a lot of people wait around for other people to dictate our happiness ... but if there’s something you’re passionate about—whether it exists in the business world yet or not—expand on it.”

Diehl says Trevecca’s entrepreneurship and small business management program, which launched last fall, aims to equip those hoping to start their own businesses with the knowledge needed to get started upon graduation. From marketing to finance, this comprehensive concentration provides all the tools necessary to overseeing the success of a small business.

“We try to shape the program for the students to find out which type of entrepreneur they are,” Diehl says. “Most ventures start out as small, and running a small business is very different than working for a regular business. We really want to bring out those differences so the students are prepared for anything.”

Business with a Purpose

Alaina Schwartz graduated with a degree in education, and though she currently teaches music with Metro Nashville Public Schools, it’s her 80-hour-a-week side hustle that the Nashville community is helping to grow.

A year ago, Schwartz and her husband, Keith, were trapped in the car on a long road trip home from visiting family in Florida, and they were dreaming out loud.

“On a long car drive like that, you’ll either grow to absolutely hate the person you’re with or you’ll talk about how you have these wild dreams,” Schwartz says. “We were on that dreaming kick ... I’m a teacher, and my husband was a manager at a restaurant. We had no money, no trust fund, no investors, but we felt this calling to do something in our community.”

Schwartz said she got onto Craigslist and found a coffee shop in the area that was closing. Without much of a plan of their own, they followed the one they felt God placing on their hearts.

“We bought all their equipment sort of on a whim. Obviously we had never done this before, but we felt this urge to do something that would make us able to reach out to everyone, regardless of race, gender, age, background, story,” she says. “A lot of people use the phrase ‘the third place’ because a long time ago, people had their home, their work and their church, and those were the three places they found their grounding and foundation. Now that the church is not necessarily a part of everyone’s life, there’s a space open for that third place. We wanted to be that welcoming place.”

A year later, the coffee shop she and Keith opened in Donelson, Caliber Coffee Co., has become just that.

“There was one night when I was buying Capri Suns for my kids in Kroger at 10:30 at night, and this lady walked up and said, ‘Do you own that coffee shop across the street?’ I said, ‘Yeah, I do,’ and she said, ‘I don’t know anything about you. I just know that when I was there, I felt so at home, and I needed a home in that moment.’ Her car had broken down at Kroger, and she was brand new to a college in the area. She didn’t know anyone, and she just happened to come in. It was just one of those moments that I knew we were Christ to her.”

Schwartz continues, remembering moments of connection with other customers as well, one of which was an elderly man whose wife had just received a terminal diagnosis.

“He was just crying at the counter, and we all gathered around and prayed with him. We didn’t know him, but we knew he needed that,” she recalls. “I don’t know if he had other family around or a church, but we were able to be there in that moment. We didn’t see him for a while, but he came back a couple weeks later. He sat and cried because his wife had passed. He just came back and cried. But he knew he could come back here and cry and have that support.”

For Schwartz, if the doors had to close tomorrow, she’d still consider Caliber Coffee Co. a success.

“I think the moments I’ve known we are doing the right thing are the moments where we’ve had that level of genuine humanity that has reached out and been present in a godly way,” Schwartz says. “It’s in those moments that I hear God saying, ‘Alaina, this is what I called you to do.’”

Bailey Basham is a recent Trevecca graduate and currently works as a freelance journalist. She loves writing, browsing Pinterest for new recipes and spending time with her dogs, Ruthie (after the candy bar) and Pico (last name, Gallo).